It might be my Slavic/Polish heritage, but I think anything made with plums or prunes is d-e-l-i-c-i-o-u-s.  Poland is among the top 20 plum producing countries, with production levels at over 100,000 tons per year.  Nothing beats Polish plum conserves, chocolate covered prunes, prune-filled doughnuts, prune layered honey cake, or even spiced plum herbal tea.  Poland’s production is pretty high , but its production pales in comparison to countries like China (over 6 million tons per year) and Romania (over 500,000 tons per year) that top the list.  Where I live in Northern Virginia, in-season plums make their entry into stores late summer and early fall.  But for about the 3rd year in a row, Italian plums/prunes have been missing in action.  That is the best type of plum to use for baking and jam making and it’s missing from our shelves at the grocery store!  It’s hands-down the tastiest type of plum when cooked or baked.  Woe is me–yet another year I have to make do with red or black plums.  Luckily, the results have still been pretty good.  For those of you in the same situation as I am, my advice is to bake plum cakes with whatever plums you have!

This recipe is for a yeast-based plum cake, which is the kind that you might come across in a traditional Polish or German household (if not other households!).  I’ve frequently made the less-time consuming yeast-less plum cakes, featuring two versions on my blog [see Polish or German versions].  If you want to be more authentic, however, you need to stick it out and go for yeast-based plum cakes.  It takes a few hours to make given the need to let the dough rise, etc., but the results are worth any and all sweat and tears.  The recipe below includes a crumb topping to make it extra-tasty and to earn it the name, “ultimate.”

Below is my version of Polish placek ze śliwkami or German Zwetschgenkuchen.  Step-by-step illustrated instructions follow the recipe.

The first step is to roll up your sleeves because this is going to take some work!  Warm some milk on the stove–only to lukewarm.

Add a teaspoon of sugar, a packet of dry yeast (not fast-acting), and some flour.  Mix it up until it has a loose, sour cream consistency or the consistency of yogurt.  Add more flour if it’s too thin.

Cover your starter with plastic wrap or a kitchen towel and set it aside in a warm-ish place in the kitchen.  Let it rise for about 15 minutes to a half hour.  Meanwhile, work on the rest of the dough.  Beat together egg yolks and powdered sugar until light-colored and forms nice ribbons when dropped back into the bowl.

Then add grated lemon zest from one lemon.  Lemon zest is one of the keys to a nicely flavored dough.  The remaining keys to a great flavored dough is the addition of some vanilla and almond extracts, which you should add in after adding in the lemon zest.

When the starter has doubled in bulk, add it to the egg mixture.

Then gradually add in one cup of flour.

Then you should change out the paddle attachment with the dough hook.  Mix (knead) some more with the dough hook while adding in the rest of the flour (about one cup).  After about 5 minutes, the dough should form a ball around the dough hook and will stop sticking to the bowl.  However, even before you reach the 5 minute mark, if you see that the dough is too loose and it completely sticks to the sides and bottom of the bowl, mix in 1/4 cup of flour and mix it until incorporated, about 2 minutes.  If the dough still sticks too much to the bowl, mix in another 1/4 cup flour for about 2 minutes.  If it’s still sticky (yikes!), mix in up to another 1/4 cup of flour.  Mix for 5 minutes more.  The dough is ready when the bowl is relatively clean (even the bottom of the bowl) while mixing and the dough forms a ball around the dough hook.  At that point, the dough is ready for the melted butter.

Be patient with the dough while the mixer is running and trying to work in the melted butter.  The mixture will look like a disaster at first, but after a minute or two of mixing, the butter will be incorporated nicely.

Keep mixing for about 5 minutes more and the dough will look shiny and smooth.  I recommend kneading the dough an additional 2-3 minutes on an unfloured counter.  However, for this batch, I skipped this step (and it still turned out fine).

Keep the dough in the same bowl, or, better yet, transfer to another large bowl, cover and let rise in a warm, draft-free place in your kitchen (or even in a turned-off oven, as I did).  I ended up transferring the dough into a new bowl, which I lightly greased with some butter before adding in the dough.

Cover the bowl with a kitchen towel or plastic wrap (I recommend choosing plastic wrap).  Then let the dough rise for about 1 1/2 hours to 2 1/2 (or even more) hours, or until doubled in bulk.

About 15 minutes before you judge the dough to be ready, prepare the plums.  Wash, dry, pit, and cut into 8ths, quarters, or halves, depending on how big your plums are and the look you want for your cake.  For Italian plums, cutting in half or quarters is best.  Actually, I like the spiky look of plum quarters, so I would recommend quartering if your plums are big enough.  I had to use super big red plums, so I halved the plums first, and then quartered each half.

As you can see, the color of the plums were basically white, so not in the best.  These plums, when nicely ripe, would be red inside.  I used them anyway, and the cake still cake out tasting pretty good.

After the dough has fully risen, prepare the baking pan.  Line your baking pan, preferably with high sides, with parchment paper, and lightly grease the paper.  I did not have a baking pan with high sides, so–and don’t laugh–I used a standard size cookie sheet and used parchment paper to create “high sides.”  I don’t recommend going this route unless you have to.  What ended up happening was that the dough rose too high for the sides so that when baking and the dough rose a little bit more, some plums and butter dropped onto the bottom of the oven, causing lots of smoke in the kitchen.  I cleaned the mess up and continued baking the cake.  The  cake turned out great notwithstanding these troubles.  But if you have a pan with high sides, by all means use it.  Or use two smaller pans–9″ x 9″ x 2″–just like the pans you’d use to make a regular batch of brownies.  OK, back to the instructions . . . .

Punch down the risen dough.  Then, with your fingers, spread out the dough to cover the bottom of the pan evenly.  No rolling required!

Arrange the plums on the dough, skins side down.

Cover with a kitchen towel and let rise in a warm-ish, draft-free place in the kitchen for about an hour.

Right before the second rise is finished, prepare the crumb topping and preheat your oven to 325°F/160°C.  Next, in a medium-size bowl, mix up flour, cinnamon, and sugar with your hand or a spoon or a whisk.

Then, with your fingers or a pastry blender, work in pieces of cold butter and vanilla extract. 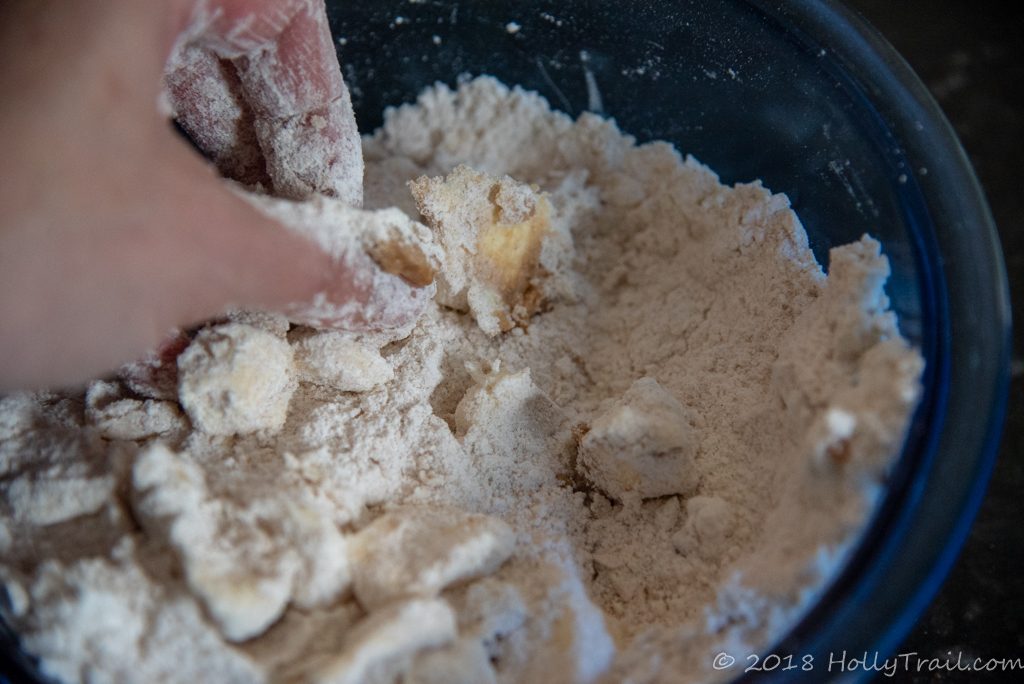 Work the mixture until pea-size crumbs form, or thereabouts.

Sprinkle the crumb topping over the plums, covering evenly.

Pop the cake in the oven (upper third rack), and let the magic begin.  Note that the edges will brown more than the center, but if the center of the crumb topping remains white by the end of 50 minutes baking time, keep the pan in the oven and bake some more, which could be up to 10 minutes more as was the case with my cake.  However, you will also need to watch whether the plums are bubbling juices because you need that to happen for a tasty cake!  For an additional 5-7 minutes, depending on your oven, put the pan on a lower rack and continue baking to ensure that the plums and crust are cooked through.  Check the center of the cake with a toothpick or cake tester–it should come out clean when the cake is ready.

If you are using nicely ripened Italian plums , the cake will be more purple than this!

After baking this cake and letting it cool for a bit, but while it was still warm, we dug in.  Piece after piece disappeared from the pan.  I had to put a stop to it so we could take some photos!!

This cake is perfectly freezable, so you can have it handy if guests pop over for coffee.  But indulging in it fresh and still warm out of the oven is really a special experience.  It would make a wonderful, sweet conclusion to a cozy and traditional fall dinner.

My takeaway with this cake is that yes, it takes a little more time to make than cakes that use baking powder as the leavening agent.  However, it is well worth the extra effort.  Think of your time spent as being part of a long-standing tradition!

This site uses Akismet to reduce spam. Learn how your comment data is processed.

Holly Trail was born out of a Friday afternoon tradition of baking with the kids. Our emphasis is on traditional baking, a little bit of cooking, and exploring our cultural roots through the warmest room in the house--the family kitchen! We also love interesting photos that document curiosities in our everyday surroundings--like our cat below, licking his chops after a quick snack.
Come and join us!